Back to Back Theatre Return to Bristol

THE DEMOCRATIC SET came to the UK for the first time for our IBT10 Festival. This time we have invited Back to Back Theatre to come back to Bristol to create a new film eight years later with people from across the city.

Helen Cole, IBT’s CEO/Artistic Director, reflects on our ten-year conversation with Back to Back Theatre.

Their shows celebrate the extraordinariness in everyone, reminding us that each person is valuable. They show us the power that lies in raising your voice, in being seen and heard. Helen Cole on Back to Back Theatre

“Ten years ago I saw this simple but brilliant theatre show, at rush hour in the concourse of Adelaide Station as people swarmed.

We sat wearing headphones listening to two voices live broadcast from somewhere out there in the crowd. Although I spent 10 minutes searching I could not find the owners of those voices. Eventually I spotted them – two figures at a distance, walking slowly towards us. I was shocked to realise they have been there all the time. Here begins a story about being unnoticed, about value and productivity, and going against the rhythm of things.

This show was Small Metal Objects by Australia’s world-leading theatre company Back to Back Theatre, an ensemble of artists with intellectual disabilities who for thirty years have set out together to tackle the world’s most challenging questions. Employing both articulacy and ambition they are fearless in facing life’s darkest moments, and since Small Metal Objects they have provoked praise and empathy across the world.

The Democratic Set was a modest idea created by Back to Back’s Artistic Director Bruce Gladwin and the ensemble in 2009. Together we wondered if it could be recreated and then toured. Using the frame of a simple wooden box it dreamed of a stage that could be open to anyone and contain the wild imaginings of us all. Countless bright and brilliant 10 second performances captured on camera and edited in an endless looping film. A family dressed as flies, a young girl skipping, a man rubbing pepper into his eyes. This became The Democratic Set for IBT10, offering a small glimmer of the artists and people of Bristol to the rest of the world.

Eight years later this Bristolian film has been seen by thousands of people and The Democratic Set has been recreated in 30 global cities. We are delighted that In July Back to Back will return to Bristol to co-create The Democratic Set with another group of incredible Bristolians once again. This time we will locate the making of the film deep in the heart of the neighbourhoods of Knowle West and Easton, working with residents of these streets and others across the city.

The ten year conversation between IBT and Back to Back Theatre has always been about asking questions and then listening better, about drawing attention to those that others overlook. As the Back to Back ensemble say “we’re people who do shows”. Their shows celebrate the extraordinariness in everyone, reminding us that each person is valuable. They show us the power that lies in raising your voice, in being seen and heard.

Welcome back to Bristol Back to Back Theatre. Let’s get this film done!” 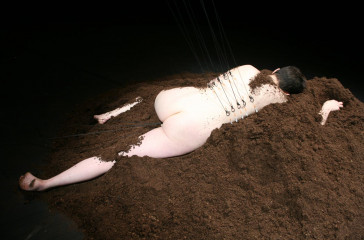 A celebration of community in the form of a film. 100 people from across Bristol collaborate with In Between Time… 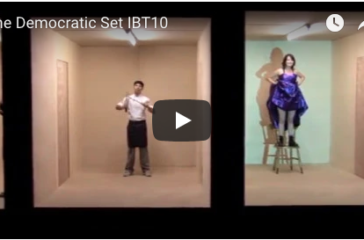